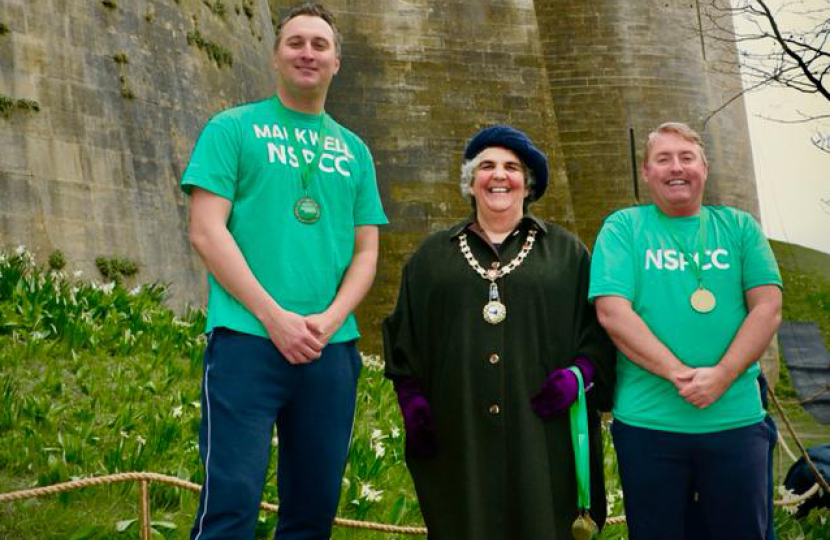 Two local Councillors in Arundel abseiled down Arundel Castle on Sunday (15 March) to raise money for the NSPCC.

Gary Markwell, who represents Arundel & Courtwick Division on West Sussex County Council and Grant Roberts, who is an Arun District Councillor for Arundel & Walberton ward, raised £965 between them for the charity as part of the NSPCCs celebrations marking 60 years of fundraising in Sussex.

Money raised for the challenge will help fund the ‘Speak out, stay safe’ programme to reach primary school children in Sussex, giving them knowledge to protect themselves from abuse.

The councillors, who braved very windy conditions to abseil 180ft down the Bakehouse Tower of Arundel Castle, were rewarded with a commemorative medal presented by the Deputy Mayor of Arundel, Angela Standing.

After his decent down the castle wall, Gary Markwell said “Having a fear of heights, this was probably the most terrifying thing I have ever done, but I am delighted to have raised such a large sum for the NSPCC”

Grant Roberts, who was joined on the abseil challenge by his mother added “As well as raising funds for such a great cause, I was also especially proud to watch my 80 year old mother, Patricia, complete the abseil with me. She is such an inspiration”.

The Commonwealth, G7 and NATO Summits